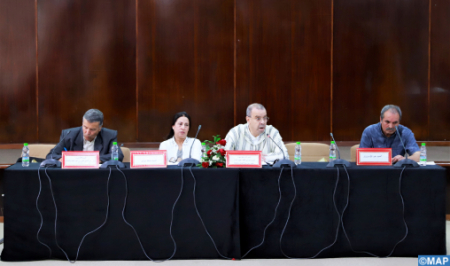 The Moroccan experience in transitional justice is considered today “world-pioneering”, said, Monday, The Interministerial Delegate for Human Rights, Ahmed Chaouki Benyoub. Speaking at an interactive meeting organized by the interministerial delegation for Human Rights in partnership with the Moroccan Forum for Truth and Equity (FVJ) on transitional justice, Benyoub reviewed the various reports and recommendations of the Equity and Reconciliation Commission (IER) particularly in terms of transitional justice and constitutional review, stressing that the constitutional reform has been more profound compared to the recommendations of the IER. This meeting aims to establish a dialogue to exchange views on the national experience in the field of transitional justice, he said, welcoming the exceptional efforts made by the National Human Rights Council (CNDH) in this area. In this regard, Benyoub has called to interact continuously with the CNDH which plays a major role as evidenced by the successful results achieved, while mentioning that Morocco has acceded between 2008 and April 2022 to eight international conventions and protocols which enshrine the choices of the Kingdom in the field of human rights. For his part, FVJ President Hassan Kamoun said that since the 1990s, Morocco has worked to end with the problem of management of social and political conflicts post-independence, highlighting the exceptional national dynamics in human rights. In addition, he underlined the enormous effort made during this process to establish the truth which is not an end in itself, but a right within the framework of a process intended to put an end to serious violations of human rights. Participants in the first session of this meeting on the achievement of transitional justice noted that transitional justice in the Kingdom is the result of a political and societal development that has led to the treatment of past violations of human rights, through a comprehensive approach ensuring the right conditions to open the debate in this area.