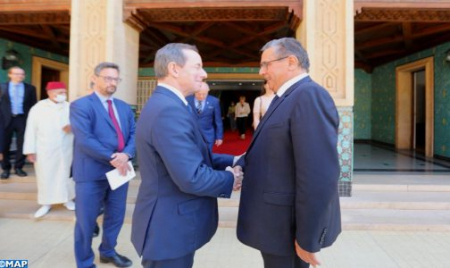 The Marshal of the Senate of Poland Tomasz Grodzki stressed, Monday in Rabat, the privileged relations uniting his country and Morocco at the political and economic levels, and which are expected to develop further in the future. In a statement to the press following talks with the Head of Government, Aziz Akhannouch, Grodzki highlighted the quality of bilateral relations in various economic and political areas. Describing as very fruitful his visit to Morocco, the official said that his trip to the Kingdom will consolidate bilateral relations that are experiencing a significant momentum. Grodzki said his talks with Akhannouch were an opportunity to discuss parliamentary cooperation and to exchange views on several bilateral and international issues of common interest. For his part, Morocco’s Head of Government said the talks were an opportunity to underline the depth of the historic relations between Morocco and Poland as well as the momentum they are undergoing, especially at the economic level. Akhannouch also highlighted the promising prospects for bilateral economic and political cooperation, noting that these talks also focused on a set of bilateral and geostrategic issues of common interest. The Marshal of the Polish Senate is on an official visit to the Kingdom on May 26-30, heading a large delegation.