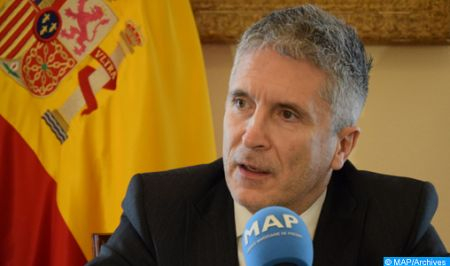 Spanish Interior Minister Fernando Grande-Marlaska stressed that his country’s relations with Morocco are “reliable and fraternal”. “Our relations with Morocco are extremely loyal, reliable and fraternal,” said Grande-Marlaska in statements to the press on Tuesday. “Relations between the two countries have been preserved, are preserved and will be preserved,” he insisted, noting that Morocco is a “strategic and absolutely loyal” partner. In the same vein, Grande-Marlaska stressed that the relations of his country with Morocco will continue to “deepen” following the approach of the visit made by the President of the Spanish government, Pedro Sanchez, last April to Morocco at the invitation of HM King Mohammed VI. “Our desire is to deepen our important relations, based on mutual trust and oriented towards the 21st century,” he concluded. On Monday, the Spanish government expressed its satisfaction with the “positive outcome” of the new roadmap established between the two countries. “We can congratulate ourselves because this new stage is proving to be very positive,” had stressed the spokeswoman of the Spanish government, Isabel Rodriguez, who was the guest of a program on Spanish TV (TVE). “We have already seen in recent weeks the positive outcome” of this new roadmap established by the two countries and which has allowed, according to Rodriguez, to advance on several bilateral issues of common interest.