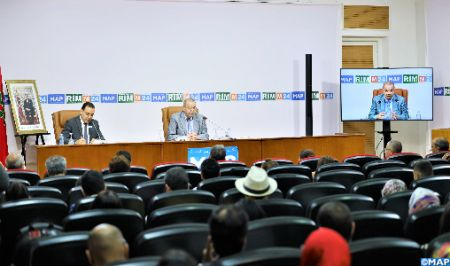 The development model of the southern provinces is based on the results of an accurate diagnosis of socio-economic conditions, said Wednesday in Rabat, the interministerial delegate for Human Rights, Ahmed Chaouki Benyoub. Invited to MAP Forum to present the basic report on human rights in the southern provinces of the Kingdom of Morocco, Benyoub noted that the development model of these provinces was designed on the basis of the results of the report of the Economic, Social and Environmental Council (CESE) of 2013, and which led to “sad” recommendations and conclusions. This development model is based on 4 principles, Benyoub said, noting that it is meant to strengthen the foundations of inclusive and sustainable human development, ensure the participation of representative actors and local people in all stages of preparation and implementation of development programs in the region, respect the human rights of citizens and consolidate the position of the state as regulator and guarantor of law enforcement. The background report on human rights in the southern provinces states that the development model of the southern provinces reflects, under the leadership of His Majesty King Mohammed VI, a forward-looking vision that aims to make these provinces a model of integrated and sustainable regional development, adding that this model is a pillar of consolidation of its integration in the country and strengthening of its status and influence as an international civilizational and regional economic pole, according to a comprehensive approach to development based on human rights and with multiple dimensions that include economic, social, cultural and environmental aspects. The report presented by Benyoub referred to the EESC report on the new development model of the southern provinces, which highlighted, in 2013, the central role played by the state as the main investor and employer in these regions, and in the achievement of infrastructure and effective access of citizens to basic services and in the fight against poverty. Since the liberation of the southern regions of the Kingdom from Spanish colonialism, the State has redoubled its efforts to develop the region and allow it to catch up with its development, said the report on human rights in the southern provinces, citing in this sense, the national solidarity, which played a major role in providing these regions with economic and social infrastructure in the early years of their return to the motherland, an exceptional effort that the Moroccan people has deployed with all its components.