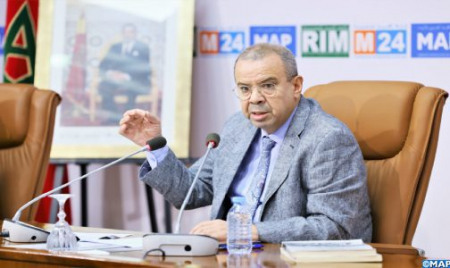 The inter-ministerial Delegate for Human Rights, Ahmed Chaouki Benyoub, said on Wednesday in Rabat that Morocco has taken up the strategic challenge of public management of the human rights issue in the southern provinces of the Kingdom. Benyoub, who was invited by MAP Forum to present the basic report on human rights in the southern provinces of the Kingdom, stressed that Morocco, by choosing transitional justice and reconciliation with the past, has managed to protect the southern provinces against all the provocations of campaigns hostile to the country, thus managing to meet the strategic challenge of public management of the issue of human rights in the provinces. He stressed that the program of security and human rights in the southern provinces has achieved a qualitative evolution in the management of human rights in these provinces, and this through the promotion of research capabilities and knowledge among the security elite so as to be able to establish bridges between the commitments of the State in terms of human rights and the requirements of programs and security culture in the context of the challenges inherent in the rule of law. He further noted that the content of this report does justice to the reports of many constitutional institutions. “We have given value to the international testimony concerning the National Human Rights Council (CNDH) and the action of the Institution of the Ombudsman because the mission of these two institutions is part of the achievements of Morocco, taking into account the place and prerogatives of each of the two institutions,” he said. Benyoub also announced that the Interministerial Delegation for Human Rights (DIDH) is working on the revision of the decree governing this institution until the revised text is submitted to the competent authorities as soon as possible, considering that the regulation of the prerogatives of the DIDH will allow to achieve a great progress in the execution of the missions devolved to this Delegation.