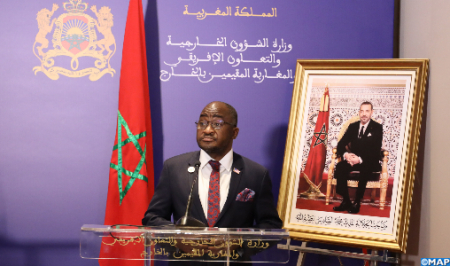 Liberia’s Foreign Minister Dee-Maxwell Saah Kemayah reiterated, Wednesday in Marrakech, his country’s support for Morocco’s territorial integrity and full sovereignty over its southern provinces. Speaking at the end of his talks with Minister of Foreign Affairs, International Cooperation and Moroccans abroad, Nasser Bourita, the Liberian FM reaffirmed his country’s support for the territorial integrity of the Kingdom and its autonomy plan for its Southern Provinces under its sovereignty, as the “only solution” to this dispute. In this regard, he recalled the opening of the Liberian Consulate in Dakhla in 2020, which is an important step to strengthen economic ties with the Kingdom and to seize future opportunities offered by the unique position of Morocco as a regional hub and gateway to Africa. Mr. Saah Kemayah also stressed that this diplomatic representation is expected to strengthen relations with Morocco, serve the Liberian community in the region and contribute to the consolidation of cooperation between the two countries. This meeting between the two ministers was held on the sidelines of the opening of the 14th edition of the U.S.-Africa Business Summit, held under the High Patronage of His Majesty King Mohammed VI, under the theme “Building the Future Together”.