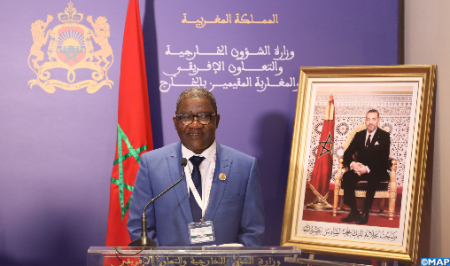 The Union of Comoros reiterates its support for the autonomy plan proposed by Morocco as the only solution to the artificial conflict over the Moroccan Sahara, Comoran Foreign Minister Dhoihir Dhoulkamal said on Wednesday. “The Moroccan plan to resolve this artificial conflict is likely to bring peace and stability in the region,” he told reporters following his talks with Minister of Foreign Affairs, International Cooperation and Moroccans abroad, Nasser Bourita, on the sidelines of the 14th United States-Africa Business Summit, which runs until July 22 in Marrakech. “Morocco and Comoros have decided to support each other every day and in all events,” he said. Emphasizing the solid, rich, and dense relations linking the two countries, the Comoran FM commended the evolution of cooperation between the two countries, especially with the upcoming opening of an embassy of Morocco in Comoros, which will be a very important step in strengthening diplomatic relations between the two countries. Similarly, he welcomed the approval by Morocco of a double taxation treaty on income tax and the fight against tax evasion and fraud, which will allow economic operators in both countries to conduct their business safely. Mr. Dhoulkamal said he was very touched by the policy advocated by Morocco under the leadership of HM King Mohammed VI, which seeks to give a new impetus to inter-African cooperation within the framework of South-South cooperation. “The Kingdom has consistently supported the leadership of this new vision, this renewed pan-Africanism and this paradigm shift, where the liberation of Africa is achieved through development and South-South cooperation,” he said, noting that Comoros backs Morocco, which has taken the leadership of this new vision. Holding the U.S.-Africa Business Summit in Morocco reflects this vision carried by Morocco, which works tirelessly for African solidarity, he added. Mr. Dhoulkamal also highlighted the “humanist” migration policy adopted by Morocco under the leadership of His Majesty King Mohammed VI.