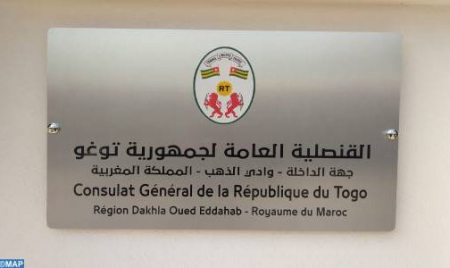 Togo’s Minister of Foreign Affairs, African Integration and Togolese Abroad, Robert Dussey, reiterated, Thursday in Dakhla, his country’s constant support for the Moroccanness of the Sahara. “The opening of the Consulate General of Togo in Dakhla expresses support for the territorial integrity and national unity of Morocco,” he said at a joint press briefing with the Minister of Foreign Affairs, African Cooperation and Moroccans abroad, Nasser Bourita, after the inauguration of this diplomatic representation. Togo’s top diplomat noted that the opening of his country’s consulate general in the Moroccan Sahara expresses the will to consolidate bilateral relations. On this occasion, Morocco’s and Togo’s FMs signed an agreement on the abolition of visas for the benefit of Moroccan and Togolese nationals, holders of ordinary passports. The inauguration ceremony took place in the presence of the Ambassador Director General of the Moroccan Agency for International Cooperation (AMCI), Mohamed Methqal, the Wali of the Dakhla-Oued Eddahab region, governor of the province of Oued Eddahab, Lamine Benomar, the president of the region El Khattat Yanja, as well as consuls accredited to Dakhla, officials and local elected officials. With this new inauguration, the number of consulates opened in the southern provinces increased to 27 (15 in Dakhla and 12 in Laayoune).