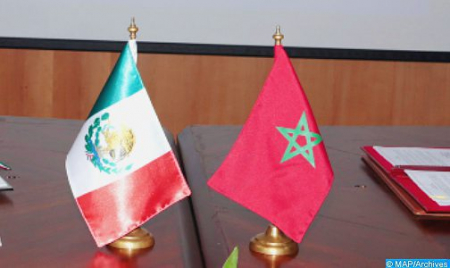 Morocco’s ambassador to Mexico, Abdelfattah Lebbar held talks, in Guadalajara, with officials of the government of the state of Jalisco, focused on means to strengthen cooperation with this region, western Mexico. On Friday, the Moroccan ambassador met with the Minister of Economy and Finance in the state government, Juan Partida Morales, who expressed the wish to initiate bilateral cooperation with the Kingdom, highlighting the importance of exchanging visits between officials and economic representatives to discuss ways of a future partnership. Another meeting with the Board of Directors of the Chamber of Commerce of the State of Jalisco was an opportunity to showcase the “Morocco Now” brand of investment and export, which aims to highlight the Kingdom’s position as a first-class industrial and export platform, and thus accelerate foreign investment, according to the Moroccan diplomatic representation. In this context, the Vice President of the Chamber of Commerce, Laura Zueck expressed the institution’s desire to establish economic cooperation with Morocco focused on export and import opportunities, and on the exchange of visits between operators and investors to conclude agreements and partnerships in various fields. For his part, the president of the league of manufacturing industries, Guillermo del Río Ochoa, noted the importance of strengthening cooperation with Morocco, especially in the automotive and aerospace sectors, voicing the wish to explore investment opportunities in the Kingdom and capitalize on its geographical position as a gateway to Africa. Mr. Lebbar also met with officials of the International Book Fair of Guadalajara, the largest exhibition in the Americas and the second largest in the world. During this meeting, the administration of this fair wished to see Morocco participate in the next edition of the Fair scheduled for next November. Morocco’s participation will take place under an agreement to be signed with the International Book and Publishing Fair of Morocco (SIEL). On the same occasion, the director of the International Film Festival of Guadalajara, one of the most prominent cultural events in Latin America, expressed the wish to invite Morocco to its next edition scheduled for June 2023, to introduce the Mexican public to Moroccan and African cinema. Mr. Lebbar had also talks with the Dean of the Panamericana University (UP), José Antonio Esquivias Romero, who expressed the desire to establish cooperation with Moroccan universities based on student and professor exchange and the organization of joint academic events.