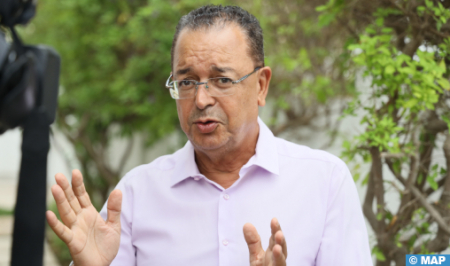 Member of the House of Advisors Lahcen Haddad, on Wednesday, slammed the remarks of the EU High Representative for Foreign Affairs and Security Policy, Josep Borrell, on the Moroccan Sahara, describing them as “incoherent” and “out of step” with the development of this issue. Borrell’s recent comments to a Spanish television are a distortion of the sovereign position taken by the Spanish government, which considers Morocco’s autonomy plan as “the most serious, realistic and credible basis” to resolve the dispute over the Moroccan Sahara,” Haddad told “M24”, MAP’s 24-hour news channel. Not only is this statement inappropriate and incoherent, but it is out of step with developments in the issue for some time, he said. Through his recent remarks on the issue of the Moroccan Sahara, Borrell wants “to go back 20 years with regard to the referendum that Morocco had proposed as a solution to the problem of the Sahara and which had been declared impracticable and unattainable by the Secretary General of the United Nations,” Haddad added. The remarks of the European diplomat “contradict the position of the EU in recent years and earlier statements by Borrel himself,” he observed. According to Haddad, “the position of the EU is known and has been enacted at the 14th meeting of the EU-Morocco Association Council. The European Union and its member states had welcomed the “serious and credible” efforts led by Morocco by referring to Its Autonomy Plan. Borrell, then Spain’s head of diplomacy, confirmed this position, on January 29, 2020, in a joint statement issued with his Moroccan counterpart. “Mr. Borrell himself had said in response to a question from an MEP on September 25, 2020, that the EU is in favor of a +realistic, achievable and sustainable political solution based on compromise,” he said. In a spirit of compromise, Morocco had proposed the Autonomy Plan that several countries regard as “credible and realistic”, and which was put on the table by the Kingdom following a solemn appeal from the UN SG to the parties to propose new initiatives when the referendum had proved “unfeasible and unattainable,” Haddad noted. The European High Representative had stated that “the European Union position is in line with the resolutions of the UN Security Council,” he added, noting that the same Council had endorsed for years the Moroccan proposal as “credible and realistic.” “The referendum as an option is not only obsolete and outdated but the Sahrawi population is regularly consulted during legislative and local elections where they express their attachment to Moroccan institutions and their adherence to the democratic process as shown by the high voter turnout compared to other provinces of the Kingdom,” he noted. “As a Moroccan parliamentarian, I invite Mr. Borrell to work hand in hand with the UN, the UNHCR, European countries and humanitarian NGOs, and to rather concentrate efforts on the release and the census of the Sahrawis sequestered in the Tindouf camps, on Algerian soil, so that they can join their relatives in the Moroccan Sahara and enjoy the same political and economic rights as their brothers and sisters in Laayoune, Dakhla, Smara, Boujdour and elsewhere,” Haddad concluded.