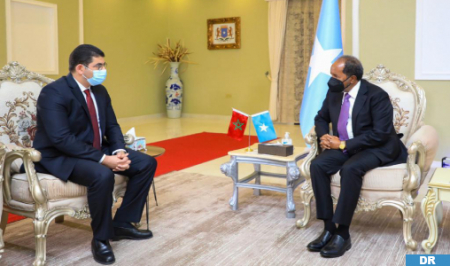 The President of the Federal Republic of Somalia, Hassan Sheikh Mohamoud, received in audience, on Tuesday in Mogadishu, the Minister of Youth, Culture and Communication, Mohamed Mehdi Bensaid, bearing a written message from His Majesty King Mohammed VI, may God assist Him. The audience, which took place in the presence of the Chargé d’Affaires at the Moroccan Embassy in Somalia, was an opportunity to review the bilateral relations between the Federal Republic of Somalia and the Kingdom of Morocco, under the leadership of the leaders of both countries, with particular emphasis on the need to raise these relations to higher levels. In a statement to the press after this audience, Bensaïd noted that relations between the two countries are distinguished, noting that Morocco has always stood by Somalia and its brotherly people. The Minister also reaffirmed the willingness of the leaders of both countries for more bilateral action and coordination at the level of all regional and international mechanisms. In addition, Bensaïd affirmed that the Kingdom of Morocco, under the leadership of His Majesty the King, is willing to share its experience in all fields with the Republic of Somalia.