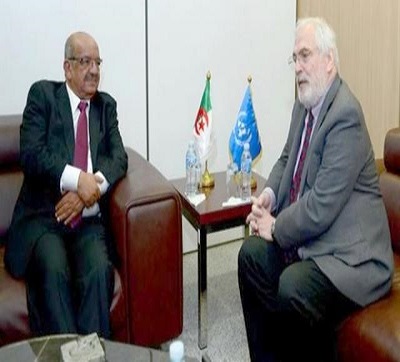 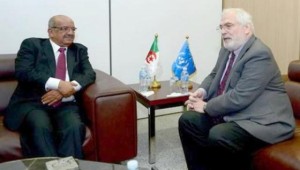 The envoy of the UN SG for Western Sahara, Christopher Ross arrived Sunday in Algiers, where he will try again to reactivate the negotiations on the Western Sahara conflict, opposing Morocco and the Polisario, but where Algeria is a stakeholder which holds the settlement key.

The UN mediator, who already paid a three-day visit to the Tindouf camps September 5 to 7, held separate talks in Algiers Sunday with the Algerian foreign minister Ratmane Lamamra and the Minister of Maghreb Affairs Abdelkader Messahel.

As usual no details about the contents of the meetings were disclosed. The Algerian state media just announced the arrival of Ross in Algeria and his meeting with the two Algerian officials, indicating that his visit to Algeria is part of the UN efforts to relaunch negotiations between the Polisario Front and Morocco.

During his latest visit to the Polisario HQ in Rabouni, the UN mediator was denied, as in the past, a meeting with the head of Polisario, Mohamed Abdelaziz. He finally met with some Abdelaziz’s aides and a delegation of Polisario negotiators.

According to informed sources, the Polisario leader received instructions from Algerian rulers not to meet Ross. The Algerians are apparently upset by the UN pressures on the Polisario, rather than on Morocco, to reach a negotiated political settlement of the territorial conflict.

What irritates more the rulers of Algiers is the fact that Western Sahara and Morocco are not, for the second time, on the schedule of the UN mediator’s trips in the region.

Observers explain this new UN tactic by the fact that the UN officials know perfectly well that the resolution of this conflict is to be found in Algeria which prompts the Polisario not to show any realism and flexibility as advocated by the Security Council in order to push forward the peace negotiations.