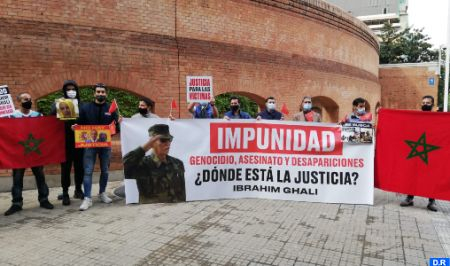 Associative stakeholders from the city of Girona and the Catalan region held, Friday evening, a demonstration in front of the Delegation of the Spanish government to demand the arrest of Brahim Ghali, leader of the Polisario militias, admitted in a Spanish hospital with a fake Algerian identity.

Participants in this demonstration demanded the arrest of the leader of the separatists so that he can be tried for the crimes he committed against Moroccan and Spanish victims.

Dozens of members of the Moroccan community living in the region, who came from several neighboring towns, took part in the protest to express their anger at the attitude of the Spanish government in allowing this mercenary to escape justice.

They were holding banners calling for the prosecution before the Spanish courts of the criminal Brahim Ghali accused of rape, abduction, genocide and serious violations of human rights, and demanding the activation of the arrest warrant issued against him in 2016.

Representatives of Moroccan civil society associations in Girona and the Catalan region have unanimously expressed their total rejection of the decision of the Spanish government allowing this criminal to enter its territory, stressing that this act is contrary to Spanish and international law and the spirit of cooperation, partnership and neighborliness between Morocco and Spain.

For associative stakeholder Fouad El Alami, the objective of this demonstration is to ask the Spanish authorities to do justice to the victims of the so-called Brahim Ghali, a notorious criminal who used a fake identity to enter Spain with the complicity of Algeria. This mercenary, who is under a European arrest warrant, was able to access Spanish territory with a fake identity without the Spanish justice reacting despite the complaints filed by the victims, El Alami told MAP.

The position of Spain “is incomprehensible and does not serve the relations between Morocco and Spain,” he said, noting that this act that raises many questions “is still reprehensible, especially as the Spanish government has invoked humanitarian reasons to illegally allow access to the so-called Brahim Ghali to its territory.

El Alami stressed the urgency of “prosecuting this criminal, holding him accountable for all the acts he has committed and preventing him from leaving Spanish territory until justice determines his fate”.

By welcoming the criminal Brahim Ghali, Spain, which has failed in its obligations to respect human rights, has sent a mixed message to Morocco, he added.