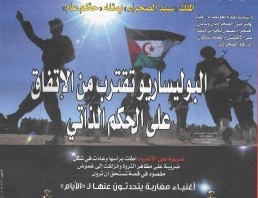 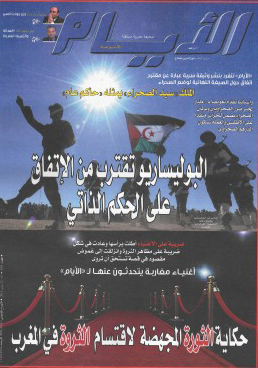 It would be the first time in the history of the Sahrawi movement for independence set in the South-West of Algeria. Immediately, a dissident Sahrawi organization called : “the coordination of the Polisario opponents”, was born inside the refugees camps in Tindouf, where the Polisario Front leadership has its headquarters. The new organization which composition and objectives would be announced in the very coming days, would regroup, in its great majority, former and present senior executives and executives of the Polisario Front, apart from the Sahrawi opponents living in the camps. In an exclusive interview published this Friday by the Moroccan weekly newspaper « Al Ayam”, the president of the Coordination who has preferred to remain for the time being anonymous, has indicated that his organization will contain some “names of great caliber”, among the former members of the Polisario Front leadership. Credible persons who have remained clean during the 35 years which is the time of this conflict, he has specified. The president of the Coordination promises to reveal during a press conference planned for the end of October, the names of the members of this new organization and information concerning it. The same press conference, he has assured, would be full of surprise especially concerning the identity of certain members of the coordination, taking into consideration the fact that they accomplish their tasks within this movement for independence.

The Coordination, he has explained, without going into details, contains some Sahrawi sensitivities and persons belonging to different trends militating within the Polisario Front, and who are not convinced by this conduct line, the style of its governing and its ideological principles. Among these members are also, according to the president of the coordination, many young Sahrawis belonging to the three generations from the movement of the young people, who are adopting the principle of the return to the origins and to the historical legality and those of the Movement of the 5th May. The latter, created during the revolutions of the  Arab Spring, claims at present change and retreat of the Polisario leadership  which should no more be recognized as the unique representative of the Sahrawi populations. The coordination which has started its actions in last June, he has reminded, is at its first stage which consists in regrouping the currents and sensitivities at the front and to establish another political line which would be more convincing as the one followed by the present Polisario leadership. The members of the coordination are “opponents who are recruited inside the camps”, because he stated, “it is not possible to stand in the opposition from outside”. We will go in the camps when we would have announced the movement and unveiled its programme and objectives”, has again promised the president  of the “Coordination of the Polisario opponents”. The latter aspire to encourage the current which believes in the necessity to find a solution which would save the face of the Polisario leaders and which strongly recommend the solution of the just milieu as a method and means of dialogue. Those are ideas that rejoin roughly the Moroccan proposition recommending a large autonomy for the Western Sahara provinces.