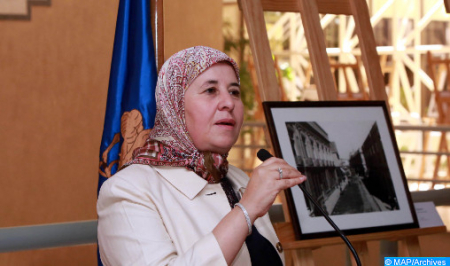 The Moroccan ambassador to Chile, Ms. Kenza El Ghali, has strongly condemned the abject situation that prevails in the Tindouf camps, where populations held against their will live “without dignity under the yoke of the militias of the Polisario and the Algerian army”. Speaking at a conference initiated by the Mohammed VI Cultural Center for the Dialogue of Civilizations and the Moroccan embassy, ​​in coordination with the Adolfo Ibanez University in Santiago, Ms. El Ghali underlined the contrast between development and prosperity enjoyed by the inhabitants of the southern provinces and the poverty imposed on the inhabitants of the Tindouf camps. Morocco’s investment efforts in the southern provinces have literally transformed the panorama of towns and villages in these provinces, which strengthens Morocco’s links with its African depth, she pointed out. Speaking before Chilean academics, the diplomat gave a historical reminder of the evolution of the artificial conflict on this territory, from the partition of Morocco by the colonial powers, to the peaceful recovery of this territory by Morocco through the Green March, in addition to the war of liberation and negotiations with the Spanish government at that time. Morocco has a centuries-old history nourished by its multiple Arab-Islamic, African, Saharan, Mediterranean and Hebrew tributaries, underlined the Moroccan diplomat, who recalled that the dynasties which reigned over Morocco came from the Sahara. The ambassador slammed the maneuvers of a neighboring country which welcomed on its territory a group of young people whom it armed and supported, to contest the recovery of the Sahara by Morocco and which continues, 46 years afterwards, to feed this artificial conflict.