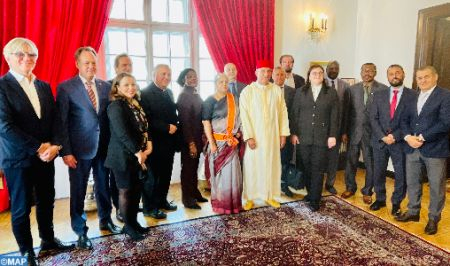 The Moroccan ambassador to Poland, Abderrahim Atmoun, presented, Wednesday in Warsaw, the insignia of the Grand Cordon of the Alaouite Wissam to the former ambassador of Bangladesh in Rabat, Soultana Leila Houssain, awarded by His Majesty the King. During a ceremony held at the Residence of Morocco in Warsaw, marked by the presence of Arab, African and European diplomats, Polish businessmen and the ambassador of the Vatican in Warsaw and dean of the diplomatic corps accredited in Poland, Atmoun stressed that this high royal distinction is a recognition of the action of Leila Houssain in strengthening the relations of cooperation and friendship between Morocco and Bangladesh. Leila Houssain said she was honored and proud of this distinction that crowns her mission in Morocco. “I am grateful to HM the King for this Wissam. I will keep in memory the five years I spent in Morocco, a country I carry in my heart and to which I remain very attached,” she said in a statement to MAP. The diplomat also praised the political and economic reforms initiated by HM the King in recent years that make Morocco a model in the region.