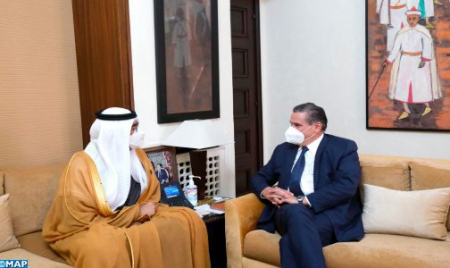 Head of Government Aziz Akhannouch received, on Monday in Rabat, the Emirati minister of Industry and Advanced Technology, Sultan bin Ahmed Al Jaber. During this meeting, Akhannouch expressed his satisfaction with the level of solid historical relations between the Kingdom of Morocco and the State of the United Arab Emirates, under the wise leadership of the two Heads of State, HM King Mohammed VI and HH Sheikh Khalifa bin Zayed Al Nahyan. The meeting was also an opportunity to examine the prospects of Morocco-UAE economic and industrial cooperation and means to strengthen investments between the two countries. Earlier in the day, the Moroccan minister of Foreign Affairs, African Cooperation and Moroccans Abroad, Nasser Bourita, received Sultan bin Ahmed Al Jaber. The Emirati minister took part in the 15th Energy Conference, organized under the High Patronage of HM King Mohammed VI, with the UAE as guest of honour. On Sunday, the Emirati minister and the Minister of Industry and Trade, Ryad Mezzour, held a working meeting focused on the promotion of trade and industrial relations between Morocco and the UAE.